Goat on a Hill

Goats. I had probably run past them a half dozen times during my daily jogs before I realized they were even there. Staring at me. That is, until one of them screamed at me in an eerily boy-like voice. 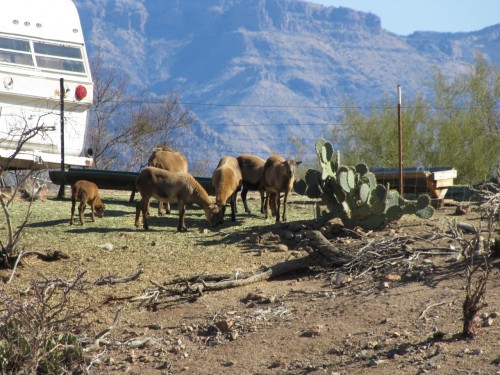 Goats feed near their camper “storage shed” with the breathtaking Galiuro Mountains in the background. Click to enlarge, then click forward button for additional photos.

So began my ritual of “baahing” back at the neighbor’s goats, or yelling, “Hi, goats!” up to them from my running trail along the railroad tracks. And then one day, I saw the curly-horned male at the crest of the hill (see him in next picture, left). His horns, like an intimidating native headdress, were a sight to behold. The Galiuro Mountains rising behind him, wrapped in all their wild west lore, simply took my breath away. The goat’s confidence, mirrored by the perfect backdrop – rugged, tough mountains – was what I saw. But, instead, the childlike words “Goat on a Hill” formed in my mind.

What a great idea for a children’s book, I thought.

My goat-calling skills are improving, as noted from this shot of goats young and old. My bellowing sure got their attention.

This wasn’t the first time I’d run past the neighbor’s property and envisioned such a story. The first occurred when I saw three Gambel’s quail sitting on the fence that enclosed a makeshift “chicken coop” that, really, was nothing more than a floppy cabover truck bed camper now wilting in the desert sun and laid to rest in dry soil.

I could hear the chickens clucking away inside and wondered if the quail were chatting with them about their outdoor freedom. Did the quail wonder why their fellow winged-brethren were caged? Then I saw it quite clearly, a title for the book: Desert Quail and Chicken Are Friends (along the lines of one of my childhood favorites, Frog & Toad Are Friends).

P.S. If you’re worried about my overactive imagination, I can explain. A previous post (scroll to “For Writers-For Everyone”) defines the phenomenon: it’s all about endorphins and the creativity unleashed while running.

For Writers – For Everyone: I can recall some of my favorite children’s books, as if I just discovered them yesterday. Doesn’t this fact, alone, illustrate the huge impact that words can have on young minds? Some of my all-time favorites include The Very Hungry Caterpillar, Where the Wild Things Are, and James & the Giant Peach. Then later … everything Beverly Cleary … and then everything Judy Blume. And so on, and so on.

What childhood stories most influenced you? Without them, do you think you’d have become a writer? An avid reader?

I think the other lesson I learned is that it’s okay to let loose and think like a child once in awhile. For writers, it can result in an extra boost of creativity and can even help with point of view. Do you agree?