Nothing quite says “Wild West” like the dusty streets and bleached boardwalks of Tombstone. Once a year, the sleepy Arizona town comes to life and brings with it whispers of the past – not unlike the spirits said to tromp along the wooden walkways during starlit nights, spurs tinging and boots thumping. 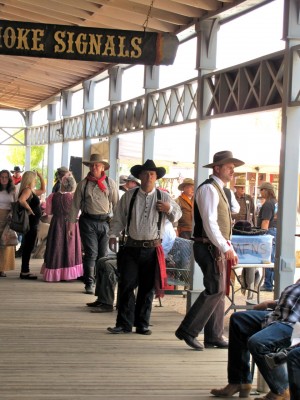 Is Tombstone a bit touristy these days? No longer a boon for mining? Slightly commercialized? Sure. During Helldorado Days, it includes carnivals, fashion shows, gunfight reenactments, and lots of food. Oh – and lots and LOTS of people dressed in vintage period cowboy clothing.

Actors play out a gun battle in the middle of the dusty street. Click to enlarge.

Despite the caramel apples, fudge and fanfare, the Helldorado events do take place on a street that is home to the original, historic Birdcage Theatre, authentic saloons, and the site of real Wild West gunfights of the 1800’s. You’ve probably heard of Wyatt Earp, Billy Clanton, Tom McLaury – you know, the fight at the O.K. Corral … lawmen vs. cowboys? Yep. That’s Tombstone, location of the most famous gunfight in the American West. 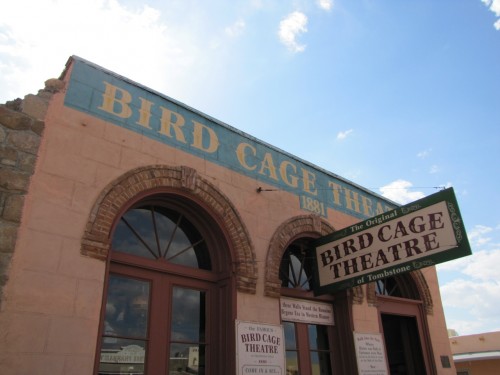 In the late 1800s, miners and cowboys frequented the Bird Cage Theatre, "the wildest, wickedest night spot between Basin Street and the Barbary Coast." I actually interviewed the owners in 2004 about the ghostly activity in their building. I literally sprinted back to my car that night. Click to enlarge.

Tombstone is, indeed, brimming with history. It’s hard not to be swept back in time, imagining the stories of this once bustling frontier boomtown known for its silver production, wondering about the characters who walked down the dust-laden streets. Traveling back in time is even easier each fall, though, as present mingles with past: Ball caps collide with cowboy hats, and cell phones and cameras snap and ring amid frontier gunshots (fake, of course). 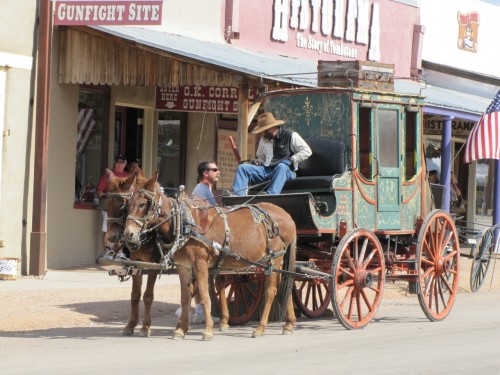 Carriage rides are also part of the day, making the experience even more authentic. OK - maybe not the present-day 'cowboy' wearing jeans. Click to enlarge.

I have a confession: Hubby and I did feel the tug of time – so much that we were compelled to enter a few stores, thumbing through the dusters and leather vests for him. I, of course, was eyeing the frocks, coats and dresses.

How fun would it be to play an Old West character for a weekend, we wondered? We’d fit right in with the Helldorado actors walking the streets. We could stay over at one of the historic hotels, hang out at the saloons and travel the same plank ways that miners and corset-bound ladies did – thrown back in time while living in the present. We could be someone else for a weekend.

Are they not THE cutest? During our anniversary visit (11 years) to Tombstone in October, we saw a dozen or so older couples dressed to the nines – all holding hands and enjoying the day. Click to enlarge.

It may very well take us until we’re elderly to get our acts together, and get our costumes right, but I can only hope that hubby and I are holding hands and strolling down Allen Street in our Wild West garb well into the future. We are going to do this. We may just start an anniversary tradition.

For Readers, Writers: Playing dress up. Isn’t that what novels allow us to do? They allow us to walk in the shoes of others, try their clothes – their skin – on for fit, enter a new world, escape reality. Do you think the notion of adults dressing up for a weekend, being someone who they aren’t, is simply crazy or do you think it could be fun? What might you learn?