Those of us who feasted on a diet of Looney Tunes and Doritos each Saturday morning as children probably grew up thinking that those funny desert plants zipping past the roadrunner and coyote were all pretty much the same: deep green, trident-looking in their shape, with three equidistant arms.

If you’re like me, you also grew up associating that shape with the word cactus (even though there are thousands of species). And you probably had no idea that what you were looking at was called a saguaro. Unless you lived in the desert or visited it, you also probably had no sense of scale since the roadrunner and coyote often seemed to be only slightly smaller than those three-pronged prickly green cacti. 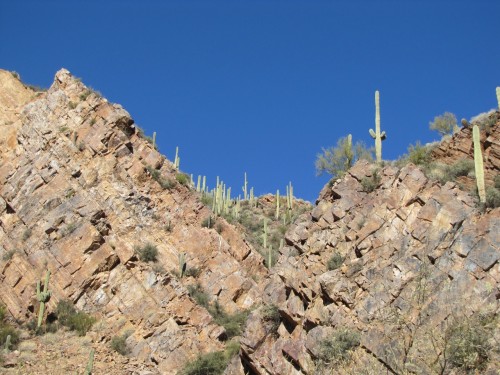 These saguaros stand in stark contrast against Arizona’s azure skies, taking root in some of the most difficult and rocky of terrains. Click to enlarge.

Now that I’ve lived in the Sonoran Desert for 13 years (transplanted from Pennsylvania where nary a cactus grew of its own accord), I’m here to tell you that those cartoon assumptions couldn’t be further from the truth. Saguaros are all different – as different as you and me.

Some aren’t as thick in the middle. Some are very small, while others are very, very tall. 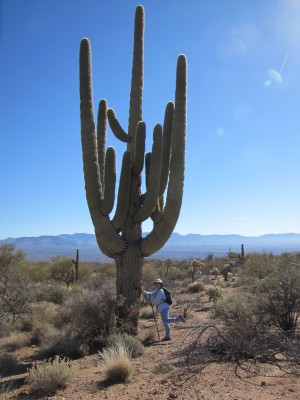 This image provides a wonderful sense of scale. Given that hiking partner Kathy (in this photo) is 5’3", we’re guessing this monster is at least 30 ft tall, proving that the saguaro has more than earned its nickname as the “tree of the desert.” Click to enlarge. 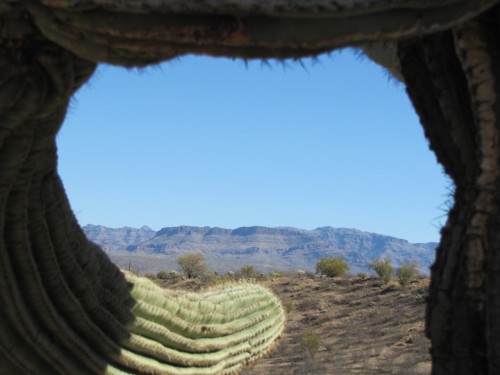 Some saguaros even have arms that curl and wrap around a mountain vista in picture-perfect balance. Click to enlarge.

Some saguaros have two main trunks. Most have one. Some have three. Some have dozens of arms, while others have none. (Hey – that was kind of Dr. Seuss-equse, wasn’t it?) And some even resemble the Coyote and Roadrunner’s counterpart, Bugs Bunny.

Need I say more? This guy looked like a rabbit with the button nose and ears. Click to enlarge.

And this cactus near Neighbor Mark and Roxanne’s house has a lot of heart. Does this newly growing double arm not say thump, thump to you? Click to enlarge.

And finally … some saguaros even cultivate different species of cacti on their own arms. The assumption is that birds dropped the prickly pear seeds, and there was just enough moisture/dirt on the saguaro’s arms to support growth. 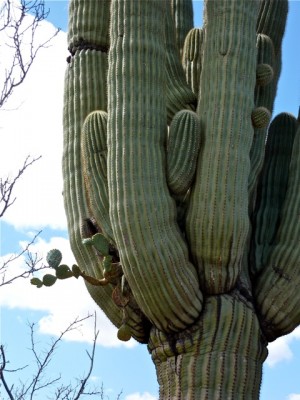 This wonderful specimen is in the wash behind my house. What a beauty! Photo by Kathy Becraft.

For Writers: As novelists, we run the risk of writing one-dimensional “everyone looks and sounds the same” characters. You know the kind: flat characters like the incorrectly portrayed saguaros in our cartoon-laden childhoods. Cardboard replicas. Characters without personality. But what if we approached our characters the same way that nature approaches its creation of the saguaro: with lots of little variances, some big differences and all kinds of diversity?

I’m personally a big fan of an MC’s emotional baggage and even his or her occupational choices when I develop my characters; just these simple details can differentiate your characters and the choices they make from story to story. What are some of the techniques you use to develop one-of-a-kind characters from novel to novel and story to story? Dialogue and colloquialisms? The surrounding environment and your character’s reaction to it? Your character’s hopes and dreams? Can you think of others?

NOTE: MORE PHOTOS AT RIGHT- I couldn’t fit all of my favorite saguaro shots onto this post (without making you scroll even more). If you’re interested in seeing more, click the Twitpic box at right for additional saguaro images.

P.S. My love for the spectacular saguaro abounds – especially as I’ve seen them struggle through the recent drought. If you missed the other posts in my Saguaro Series, feel free to take a look now: End of Mighty Saguaro, and Majestic Crested Saguaro. And stay tuned for Series IV, V and VI.