In the southwest, you see them everywhere. Windmills. The old-fashioned kind, and even now, some of the high-tech wind turbines scattered about.

I’ve always admired the spinning wheels against azure skies, viewing them mainly as relics that mark a bygone era. I never stopped to think about the vital water they provided (and still do) to open-range cattle.

This water-pumping windmill, an F&W made in Kendallville, Indiana, is in a remote area of southeastern Arizona, but is now retired. Click to enlarge.

So, yes, it’s safe to say I didn’t think much about windmills at all. And I certainly never thought about the idiots that think it’s a sport to shoot at windmill blades and motors. That is, until I met a local rancher who graciously shared his insight for my Work In Progress (WIP – commonly know as novel).

When windmill hunters aim for the motor (and hit the target), it’s no surprise that oil leaks out and the engine seizes up. When these “sportsmen” shoot at the blades, the bullet holes create resistance, making the blades less efficient. So, either way, it’s a pretty jerky thing to do.

My advice to these hunters: find a new sport. Because behind every windmill are a bunch of thirsty – and sometimes angry – cattle. And standing just beyond the cattle, there just may be a rancher holding his own gun.

For Writers: The writer’s mind often spins at the same rate as a working windmill. Ideas whirl in our heads, plot points intersect, we get confused, we get excited. And yes, sometimes we even spin our wheels.

To keep your windmill of ideas primed when beginning a new WIP:

Whether you use Buxbaum’s method, which lends itself to allowing the characters to drive the story, or whether you are a plotter-planer with an outline, developing some system of organization can help the creative juices flow.

Give it a whirl. These techniques might help you avoid spinning out of control, or may prevent the blades of your imagination from seizing up.

I am a complete sucker for a good story. Add to that the fact that I am like a child in a toy store when I’m in the middle of nature, and you’ll likely understand why my recent quad adventure with neighbors was so memorable.

It included a trek into the remote desert, picturesque views and a fascinating tale of a lost city. 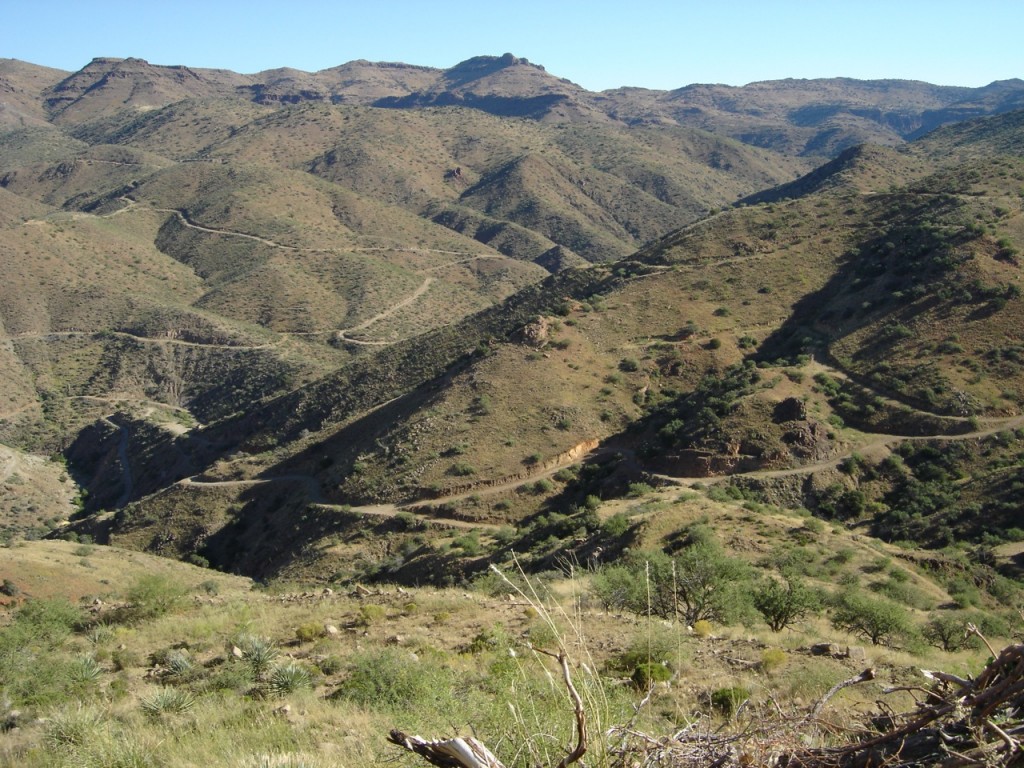 These rolling hills in Arizona’s Galiuro Mountain range lead to the remote area of Copper Creek Canyon, a struggling mining town erected in the early 1900s. Click to enlarge.

As history notes (and my sore back can attest), rough terrain is the hallmark of the journey to Copper Creek. So when we finally reached our destination on switchback after switchback (on the comforts of a padded seat, mind you… not a wagon or saddle), I had already developed a deep appreciation for what I was about to see.

The stone turret, peeking out of the cottonwoods, didn’t disappoint. If anything, I was astonished at the resilience of the early townsfolk to have built and survived in this truly remote area. Not to mention, their mansion was three-stories and built to last. (Take a look at these wonderful vintage postcards that show just how harrowing the building process was. They also depict the infancy of the Copper Creek mining area, including the mansion and the mercantile, then intact). 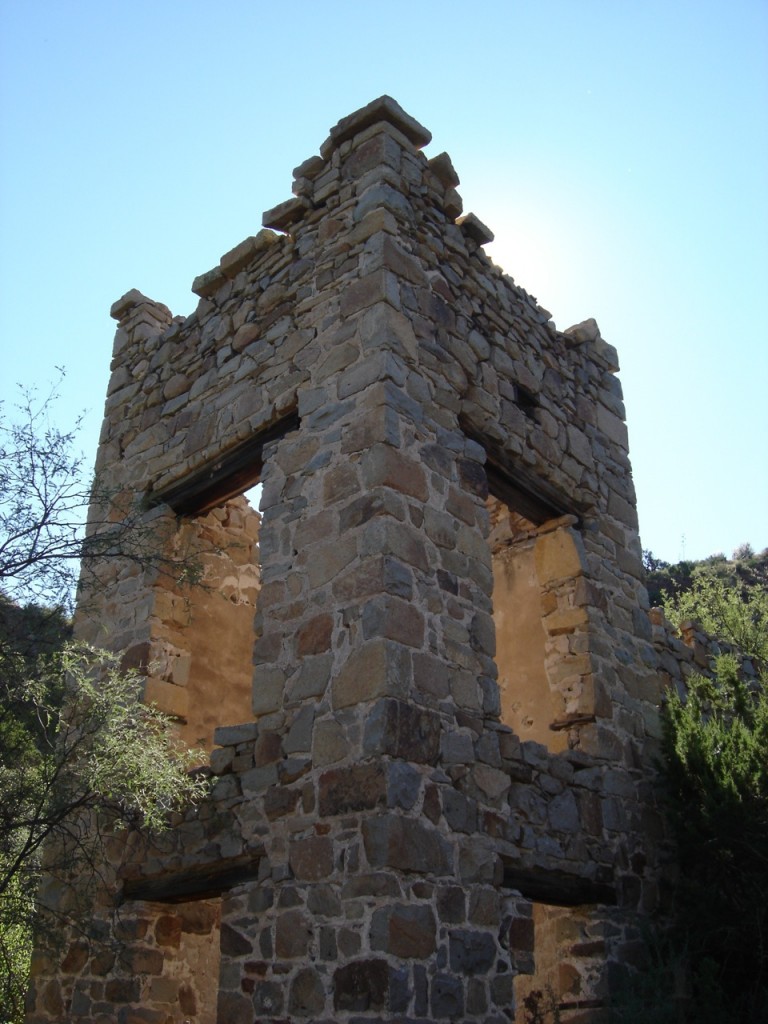 This photo shows the remains of the three-story Sibley Mansion – built to attract mining investors – in the Galiuro Mountains. Click to enlarge.

For Writers: When I think about it, I see multiple parallels between the Sibley mansion and the novelist’s writing journey. These buildings, without the conveniences of modern technology, were built stone by stone. In much the same way, the writer starts with a foundation (plot), adding stone after stone, layer upon layer: character, setting, sensory elements, tension, dialogue. It’s a labor-intensive process, and sometimes it seems daunting, overwhelming.

But when I look at the territory these settlers had to cover – the hardships they had to endure – I think that it’s the least I can do, as a novelist, to follow my dream. The settlers’ dreams and determination literally crossed mountains, often resulting in death and hardship.

So, despite the tough road to publication, I think I owe it to myself to keep going. To show that same tenacity. To keep writing. And so do you.  I don’t want my novels to become the forgotten mansion, the lost town, existing only in my memory.